As per the original plan for the anniversary celebration, we had planned a party at a lounge in Pune. But due to the recent outbreak of Covid-19, we had to cancel that plan. But celebration toh banta tha.. So we decided why not do a short breakfast ride to Mulshi and celebrate there.. Anyway it is said that lots of sunlight and fresh air are good to fight Covid-19 😉

The ride protocol was floated and the rider count went on increasing. On the morning of the ride, 29 riders gathered at Chadani Chowk to ride to Basho’s, Mulshi for breakfast and celebrations. In about an hour’s time, we were at Basho’s, ordering food..

There were a few awards planned on the occasion of the anniversary for certain categories for members who had excelled or made important contributions to the club in one way or another in the last year.

The first one was the award for the Shining Light. It was given to Abhinay for being an excellent lead not just on quite a few rides, but also taking initiative in organizing events and making sure they were executed perfectly without any hitch. The second award was the Patience award. Shree won the award for always stepping up to fulfill the duties of the sweep on rides and also doing so without complaining, no matter how long it took for the ride to end and ensuring that everyone made it back safely. The next award was the Rising Star award which Namit won for being the most enthusiastic rider in the past year. Next one was the Wanderer award that was given to Sachin Sharma for his solo biking tour. Then was the award for the Most Supportive Rider which was won by Sandeep Gadre for being the most helpful rider on rides. Aniket Aher won the award for the Best Riding Skills. Rohit Antarkar, being a super friendly guy and also getting many of his friends to join the club, won the award for the Most Friendly Rider. I won the award for being the Unsung Hero for the contributions made to the club by making and maintaining the club website, which has seen a lot of growth in the recent times. Lastly, Sai won the Breakdown Master award for facing many breakdowns in the last year 😀 Patches were given to Bharat and Neena for completing 75 rides with the club and Anwar was given a patch and a big flag for completing 100 rides with the club. Heartiest congratulations to all the winners!!!

Post the awards and the breakfast, a cake was cut to conclude the celebrations. Soon, we were on our way home and reached the end point at Chandani Chowk by 12:30 pm.

No matter how long the ride, no matter how harsh the terrain, members are always ready to ride. The enthusiasm the members have and the feeling of brotherhood that I get from this club are truly like nothing else. KRRC and its members have taught me a lot, both in terms of riding skills as well as values.

Here’s wishing KRRC a very happy 3rd anniversary! I look forward to many many more years of riding, many new experiences, exploring new routes and having a lot of fun with KRRC. Thank you for letting me be a part of this wonderful family! 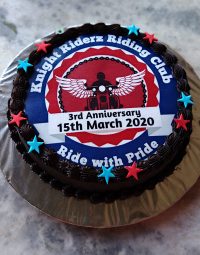 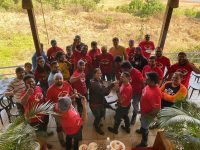 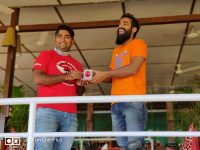 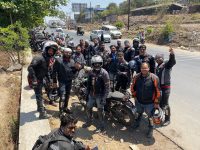